Eat Healthier, Even During a Pandemic 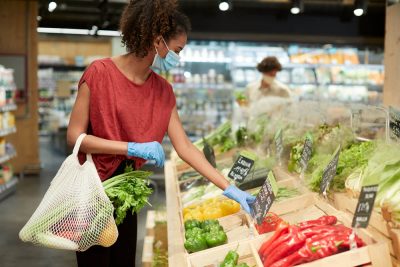 At the pandemic’s start, many of us stumbled into a new way of life that necessitated eating every meal at home with just those who lived there. About 80 percent of Americans say they’ve made at least one change in the food they eat or the way they source or prepare it, surveys found. Initially, we all viewed those changes as a stopgap. But as the weeks turned into months, we realized we had developed new patterns that could have lasting consequences.

Like everything about this pandemic, different groups have been affected in various and often unequal ways. “Some people are doing extremely well, and others are declining in their health,” says Jagdish Khubchandani, PhD, a pro­fessor at New Mexico State University and lead author of a study on U.S. eating practices during the pandemic.

“There are many benefits to cooking at home,” says Emma Laing, PhD, director of dietetics at the University of Georgia. It can give you “more control over the ingredients,” and “it can be soothing to engage all of your senses in a purposeful activity.” To make the most of home cooking, try these tips:

Buy extra and freeze. Many foods can be frozen, so put your freezer to work. For example, freeze berries and grapes on a cookie sheet lined with wax paper or parchment, then place them in an airtight container in the freezer. Or blanch veggies in boiling water, then run them under cold water before freezing in an airtight container.

Plan your meals. Campbell says she often reads recipes online and plans meals for the week so that she can take fewer supermarket trips while making her food budget go further.

Buy in bulk. To keep prices down, Campbell says she buys some groceries with a friend. “It’s much more affordable to buy a ‘family size’ package of meat or chicken or a big bag of broccoli and split it,” she says.

Cook once, eat twice. Make double or triple portions so that you have several servings of a healthy meal. Dishes like vegetable soup, chili, pizza, and lasagna freeze well. Divide into one or two servings so that you can pull out only what you need.