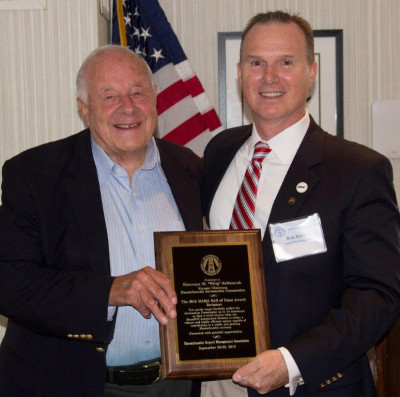 ‘Whip’ Saltmarsh is a former Chairman of the Massachusetts Aeronautics Commission (MAC), having served on the MAC Board from 1991 to 2003.

Bob Mallard, former Executive Director of MAC and current MAMA Vice President, presented the award to Whip Saltmarsh. Saltmarsh served his community and state through a distinguished 43-year career in public service including 14 years as a State Representative in the Massachusetts House of Representatives; all 14 years of which he served on the State Transportation Committee. Saltmarsh authored crucial legislation and secured state and federal funding for transportation, economic development, finance, public works and education programs that continue to spur municipal, statewide and regional growth today.

As Chairman of the MAC, Saltmarsh secured transportation bond funding totaling $160 million, and he oversaw $215 million in airport improvements.
He implemented many programs while at the MAC including a statewide vegetation management program and statewide airport security program.

A crowning achievement of his tireless work with the Administration and Legislature was passage of the Aircraft Sales Tax Exemption bill in 2002, just prior to his retirement from state service. State Senator Thomas McGee, Co-Chairman of the Joint Committee on Transportation, was on hand to offer his congratulations and to share his memories of Whip’s days in the State.