When You Really Need to Replace Your Bike Helmet 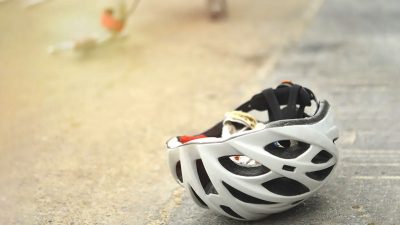 Whether you’re cycling more because of the pandemic or simply thinking of getting back on your bike for the physical and mental benefits of riding, one thing is certain: You should be wearing a helmet.

But if you’re dusting off an old helmet you had stashed away in your basement or garage, you may wonder whether it’s still as protective as it was when new off the shelf.

“A helmet can look fine after a crash,” says Rich Handel, a test project leader at Consumer Reports, who has been involved with Consumer Reports’s bike helmet testing. The outer plastic shell on the helmet may bounce back to a normal appearance, even if the interior foam has been damaged in a way you can’t detect.

“Once that foam is compressed, you are reducing the safety margin you have,” he says. “That’s not going to protect you.”

But if you really like your old helmet and it’s in good condition, holding on to it for longer isn’t necessarily going to put you at significant risk, according to Randy Swart, director of the nonprofit Bicycle Helmet Safety Institute, and former vice chairman of the helmet and headgear subcommittee for ASTM-International, a nonprofit, voluntary standard setting organization. “My own personal helmet is much older than that,” Swart says, though he adds that there may be other good reasons to get a new helmet, such as more protective technology included in some newer models.

A beat-up, worn-out helmet will protect you better than not wearing one, according to Handel, but eventually, you’ll want to replace it.

Depending on where and how it is used, a helmet will be exposed to different levels of wear and tear, plus different environments, including varying degrees of heat and humidity, says Barry Miller, Ph.D., director of outreach at the Helmet Lab at Virginia Tech, which tests helmets for a variety of sports and conducts research into how helmets can reduce risks for brain injury.