Among the many threats facing drivers during winter is the most dangerous of them all: Slippery, hard-to-spot and potentially deadly black ice.

“The biggest danger [with black ice] is that you are at the mercy of your vehicle and the ice until your car passes over it,” said Julie Lee, vice president and national director of AARP Driver Safety.

Black ice forms when it’s raining and air is at or below 32 degrees Fahrenheit at the surface, according to AccuWeather Senior Meteorologist Andrew Mussoline.

The ground temperature causes the precipitation to freeze upon impact, thus creating ice. Sleet and the refreezing of snow or water can also generate black ice.

It gets its name from its ability to blend in with its surroundings.

“It’s called black ice because it tends to look like the rest of the pavement on the road, but it’s actually clear,” Lee said.

The complexion of black ice makes it extremely difficult to spot, but using a car thermometer as an initial gauge can be helpful in determining the road conditions.

A car thermometer, like any digital thermometer, tries to find the air’s ambient temperature. So, if a vehicle’s thermometer is close to freezing, the driver should take extra precaution behind the wheel. 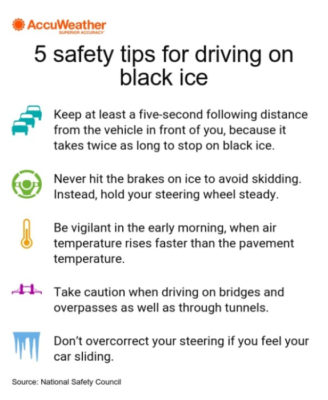 While the sensors themselves are usually very accurate, their placement on a vehicle can make them less reliable.

Located outside the car behind the front bumper, these sensors sometimes pick up heat from the car’s engine, resulting in a higher temperature reading, according to AccuWeather Senior Meteorologist Frank Strait.

In addition, these thermometers can also read lower if rainwater hits the sensors and evaporates while the car is at a higher speed.

Although car thermometers give relatively accurate readings, they can be incorrect for various reasons, so they should not be used as the absolute authority, Strait said.

Due to the restrictions of a car’s thermometer, the best way to know if roads are icy before heading out the door is to be aware of when, where and how black ice forms.

The prime time for the development of this ice is between sunset and sunrise, when temperatures are typically the lowest.

During the day, the best thing to do before getting in a vehicle is to take a look at the pavement.

“If the pavement is dry but you are seeing spots of pavement that look dark and glossy, that is probably going to be black ice,” Lee said.

Before getting on the roads at night, drivers should be informed of the area’s weather conditions, as black ice is hardest to see in the dark, according to Lee.

The most common locations for black ice are shaded or tree-covered parts of driveways and roadways due to the lack of sunlight. Because of their ability to freeze quickly, bridges and overpasses are also prime locations.

While driving on black ice is similar in some regards to driving on snow, the biggest difference between the two is the amount of traction the vehicle retains.

“With snow, there is still some traction; whereas on ice, there is no traction, and that’s where it becomes very dangerous,” Lee said.

Due to a vehicle’s lack of traction on ice, the basic rule for driving on black ice is to stay calm and let the vehicle pass over it, according to Lee.